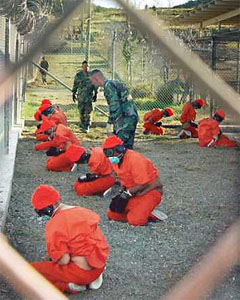 "The Bush administration is preparing plans for possible lifetime detention of suspected terrorists, including hundreds whom the government does not have enough evidence to charge in courts.

Citing intelligence, defense and diplomatic officials, The Washington Post said the Pentagon and the CIA had asked the White House to decide on a "more permanent approach" for those it would not set free or turn over to courts at home or abroad.

"Since global war on terror is a long-term effort, it makes sense for us to be looking at solutions for long-term problems," said Bryan Whitman, a Pentagon spokesman. - US to Mull Lifetime Terror-Suspect Detentions 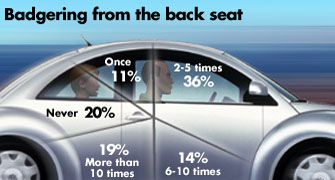 "Just 20% of parents say their children never ask "Are we there yet?" or something similar during the road trips." -  KRC Research for Goodyear Tire & Rubber.

"Since I have neither shame nor subtlety", let me point out that nominations for the 2005 Bloggies are now open, in case you’re interested in nominating

aman_geld (or of course any other) blog in one of the categories.